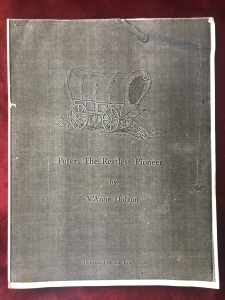 I’ve just read a second fascinating account of my pioneer family history. This one centers around my grandmother’s great-grandfather Peter Franklin Clark (related to William Clark of Lewis and Clark fame, apparently). He managed to hit all the major 1800s pioneer highlights in his life: the California gold rush, the Civil War, and the Oregon Trail.

Clark’s first adventure, in his early twenties, was heading out to California with some friends and pack horses for the gold rush. On the way they fought Indians and in Nevada slept on uncomfortable hard blue rocks which would later turn out to be infinitely valuable silver–Clark would never strike it rich on gold either. His time mining gold in a California that just a few years before had contained only tens of thousands of white settlers (hard to imagine) sounds almost idyllic. A friend wrote to him later reminding him of their “lonely cabin–the tall pines, the rushing streams, the column summer skies, the moonlight nights, and the drizzling rain of winter…”

The route Clark took home from California I found particularly fascinating: I had absolutely no idea that for a period of time around the California gold rush the fastest way between the east and west coasts of the US was through Panama, known as the Panama Shortcut. I suppose this makes sense when you think about the vast prairies and deserts in the middle and western parts of the country without roads or trains; still it’s kind of mind blowing thinking of taking a steam ship down the coast of California, trekking across Panama, taking a ship through the Gulf of Mexico and finally a paddle boat up the Mississippi, and having that be the fastest way. This route took Clark via Havana, “the largest and most beautiful city Clark had ever seen”. The whole trip took just over a month and was paid for with gold dust.

Finally, in 1874, Clark packed up the family and hit the Oregon Trail in a train of covered wagons. From this account it sounds like the trip was a bit more perilous than the one the family of Clark’s future son-in-law would undertake a few years later, but months later the family at last arrived in Zena, Oregon and began to homestead. One of my favorite anecdotes from the covered wagon journey is that they could place milk into a churn in the morning and it would be jounced into butter by the evening.

In the Civil War Clark was an officer in the Missouri cavalry on the side of the North, though his experience sounds like it mostly involved camping in extreme blizzards on the frontier. Still, from his letters home to his wife struggling to survive through winters back on the Missouri farm with a bunch of children and little help, it kind of sounds like he’s enjoying himself and isn’t so keen to get back. There are some very time-capsule descriptions of encounters between his men and Indian bands, this being pretty much the end of the era when there were other peoples and nations to just sort of wander into out and about in a blizzard. The oddest thing about his civil war time, which I wish the account went into a bit more detail about, is the fact that Peter Franklin Clark seems to have had is own personal black slave with him while campaigning.

To the extent that our genes influence our characteristics, I think pioneer genes make for an interesting case. There’s a National Geographic article “Restless Genes” from a few years back that posits, basically, that whatever restless nomadic gene humans have, the one that urges us to explore, concentrates on frontiers and spreads in the forefront of human migration. The analogy used in the article: the cane toads that spread across Australia via the simple expedient of the longest-legged most restless toads in the vanguard meeting up with the other longest-legged most restless toads also in the vanguard, together producing even longer-legged and even more restless toads to push the migration even further.

In a similar manner it’s quite possible that, in the case of westward expansion in the US, the pioneers with the most restless, nomadic urge to explore moved west where they met others with similar genes and created offspring even more willing to forge even further west. Thus, perhaps, my hefty dose of restless nomadism: two West Coast parents descended from many generations of American settlers, some of the earliest, in fact, to cross the Atlantic. No wonder I want to keep moving, now it just tends to be in crazy zigzags as there isn’t so obvious a “forward”.