It’s Halloween! Probably my favorite holiday and, I believe, a reasonable time to indulge in some sugar, especially as I’ve been so completely on the wagon for months. Thus a paleo pumpkin pie! Also organic candy corn (cue smiley face with tears of laughter emoji, please), which reading The Paleo Approach does make me think is probably a slightly better indulgence option than the normal pure corn syrup variety. A pure indulgence still, but my favorite Halloween candy. Something about the texture…?

The pie was some pretty deep paleo baking, though to be fair I don’t remember the last time I baked a pie of any description and had to google whether the pie dish should be greased. (It should not.) The recipe I used called for three different types of paleo flour, (almond, coconut, and tapioca starch) all of which I’ve accumulated at this point in forays into more serious cooking. Mixing the dough in the food processor was especially satisfying. Plus paleo food number 190: pumpkin! Nearly there! 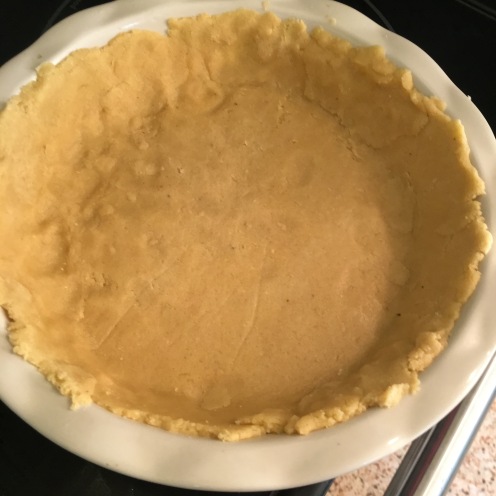 Overall very good! Fun to have such a ginormous treat. The crust is a little gluten-free tasting, but it’s good, and the pumpkiny-spicy-sweet-soft filling is delicious.

Anyway it’s Halloween! I won’t be going out this weekend, just for a change, I thought I might be ready for the world by now but not quite. In fact, other than a couple hours with my brother in Iowa (which was very nice), I actually haven’t hung out with anyone in my approximate age bracket since last May, which is a bit surreal. Still, enjoying this sugary stay-at-home Halloween and looking forward to starting NaNoWriMo tomorrow! I think I’ll be using small slices of pumpkin pie as self-bribes to get word counts done…

Halloween is also our three year anniversary of acquiring Ginny, our black Halloween cat with a ghost on her chin.