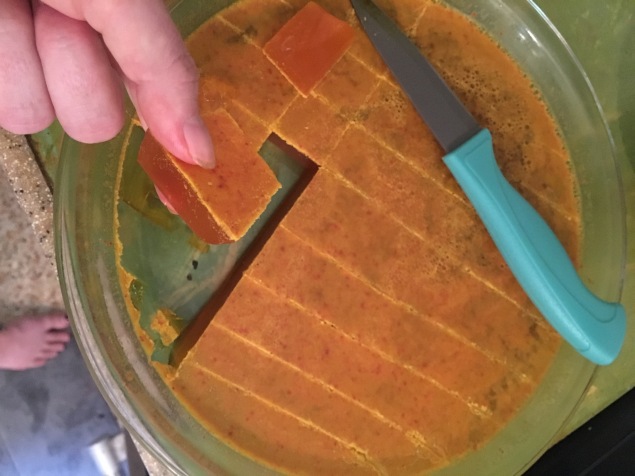 I made turmeric gummies! Actually they are more like curcumin and honey jelly squares, and they are pretty tasty. I got the recipe here, but it’s basically gelatin, honey, coconut oil and turmeric (I used curcumin powder and recommend adding more than in the recipe, next time I think I’ll add 3-4 times as much). Kind of a fun anti-inflammatory treat.

Apparently turmeric, or more specifically the compound in it called curcumin, is one of the best things you can take for inflammation. The curcumin must also be what gives turmeric the sweet part of its smell and taste because 95% curcumin smells amazing: opening the bag I bought was like opening a bag of candy.

Interestingly, on its own the curcumin in turmeric is not in that high of a concentration and is not that bioavailable, so just adding turmeric to your food or taking a plain turmeric supplement doesn’t have too much of an anti-inflammatory effect. Apparently the most common way to make curcumin more bioavailable is to either add black pepper or fat.

Lots of supplements do add black pepper and I spent a long time (way too much time) researching different supplements to come up with one that is a strong curcumin extract not just turmeric, adds black pepper, is organic, comes from a sustainable ethical company, and isn’t too expensive. Yes I do indeed have a lot of time on my hands, but I think the result is worth it: this stuff by NatureWise

smells amazing, comes in a nice big bottle, and I can feel the anti-inflammatory effects of it in my muscles when I take it.

I also wanted to be able to add curcumin to my tea and found a powerful organic powder that is an absolutely amazing color and tastes much better than adding straight turmeric to tea (this is the curcumin that smells like candy).  Hopefully it’s working to make my tea anti-inflammatory because I add fat in the form of coconut cream, and heating it is also supposed to make it more bioavailable as long as it’s not boiled.

3 thoughts on “Turmeric and Inflammation”

View all posts by Cassiopeia108